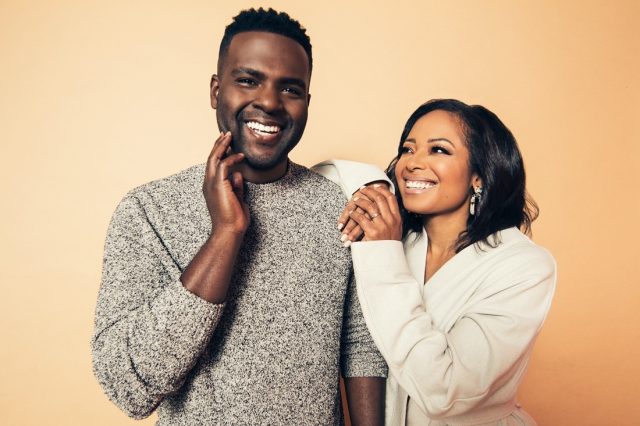 Grown Folks Music talked with husband and wife duo Juan and Lisa Winans.  We talked about the first single from the group’s upcoming album– an instant and timely anthem called, “It Belongs To Me”. The couple also shared a the reason behind signing on to do the NBC show Songland and what it means to carry a last name synonymous with gospel royalty and musical legacy. Read below and enjoy.

GFM: Let’s talk about this anthem of declaration you just dropped– “It Belongs To Me”, featuring Marvin L. Winans.

Juan: Absolutely. You know, first of all, for you to call it an anthem– that resonates with us because when God gave us the song our prayer was that, and when we recorded it with Uncle Marvin our prayer was that when people hear it they feel the presence, the power, and the love of God. There’s so many promises in Scripture from our father to us that say, ‘Hey, like, I want you to have abundant life. I’ve actually made a way for you to experience that.’  This song is us just declaring it belongs to us– salvation, healing, every blessing that God has created– it comes from him. We receive it, we accept it and it’s really our declaration to walk in it. We don’t have to wait to get to heaven to have abundant life. And so we’re just declaring that these are the things that God has for us. We believe it, and even in a trying season as the one we’re facing now with Coronavirus–so many tragedies, so many sad stories– we still believe that God is in control, and that he has great things for us.

GFM: You’ve been married for a while and you’ve both been artists in your own right. What made you become a group and how did you find your combined artistic identity?

Lisa: That’s a great question. As you mentioned, we both had groups prior to leaving and getting married. But Juan and I fell in love really writing songs and enjoying the creative process and respecting the other’s work and opinions and just their gifts. And so to kind of do that and transition as a married couple… you know, we’ve been worship pastors together, we’ve written together, but this truly is the first time… or our Christmas record was the first time… that we really combined our artistry.

That came with great joy, but it also came with some challenges because when you’re talking about, you know, artists, we’re sensitive. We believe that our way and our opinion is how it should be because you have this core belief. One thing that we had to kind of really learn is that our opinion is our opinion. It’s not a mathematical equation it’s not, you know, a law and how do we make room and respect each other’s opinions [or] give way when [you] need to and kind of push for your opinion when [you] need to. So, it’s really been a work in progress and really helped, I think, to mature us in another way. But it’s something that, you know, we believe that we have something to say to the world. We believe that we have encouragement to give and so if God wants to use our marriage in this way, we are saying, absolutely, ‘Yes and Amen.’

Juan: I would add that I’m not sensitive. I don’t know what Lisa’s talking about [laughs].

Lisa: That’s not true. He’s not sensitive like in the traditional sense [laughs], but you know, as an artist…

Lisa: Yeah, exactly. He has strong opinions… as you should. I think that anybody that’s great, you know, believes in what they’re doing. So, we’re just constantly trying to put our ideas and things together so that the song wins. It’s not about me winning or him winning, but it’s truly about us winning, and the music winning and the ministry winning.

GFM: We have a saying around here at Grown Folks Music… one of them… is, ‘Long live the songwriters.’ You’ve had some writing placements with some big-name artists. Why did you decide to take your talent to NBC’s Songland?

Lisa: That’s a great question. Well, you know, I think that’s one of the things that we were kind of apprehensive about. We’ve never done any type of competition shows. We both been asked to do other big competition shows, and we just kind of shied away from that. But, my former record company president reached out and said, ‘You know, I think this is something that would be great for you and Juan.’ And we just said, ‘You know what, let’s just… kind of like that Shonda Rhimes [book], Year of Yes… like, let’s just say yes.  Let’s see what God would do and let’s just put ourselves out there.’

I think a lot of times, you know, fear of what you might look like… fear of what might other people might think… at least for me… I’m not speaking for Juan. But like, ‘Oh, she already had success. Why is she on the show?’ If you don’t win, like, what do people say? I think moving past that and just kind of embracing an opportunity for what it for what it is– is just the step that we decided to take. I’m so thankful that we took it.

A lot of people don’t know it, but we didn’t make it on the first season. We applied. We went through the process. We made it all the way up to like the final hour, and then we were told that our song wasn’t selected. That was, you know, kind of crushing and just a little disappointing. But, we decided to try again. They called,[and] we said, ‘Okay, we’re gonna go for it again.’ It turns out we were paired with artists that we have loved for a really long time– it feels like forever– the illustrious Boyz II Men. So, to have that experience and to present to, you know, people that we are truly fans of was incredible.

Focusing on Perspective During a Pandemic

GFM: Speaking of writing, I’ve been asking artists that I’ve talked to during this pandemic how they think this time will inform or influence their work, and I see that you guys have already put out a super-cute video of your family singing about staying home. But in all seriousness, has this time inspired anything that you will add to your upcoming album?

Juan: I think it has. I mean, the time is completely… in our generation… is unprecedented. You know, we’ve never at a global scale been in this position and in this place. So, we are certainly praying on a regular basis and like, ‘Okay, God, what is it we’re supposed to take away from this?’

As artists I think we’re really focusing on our perspective. There are always multiple ways to look at a thing. For us, we’re trying to figure out how can we look at this, not just positively for the moment, but in a way that will be lasting. You know, the idea like, ‘What’s really important in life?’ And when you go through a season like this, you realize it’s family, it’s God, it’s the people that you love. Some of the… like the luxuries of life fall away and they become less important, and you’re able to focus on what’s really important. I know that as artists [and] as songwriters that will certainly inform our creativity. That will certainly inform our songwriting, because it allows you to block out a lot of noise and say something that’s really true and really authentic, and I think if you can do that, you can touch the like the most people.  So, absolutely… certainly.

Building on the Foundation of a Musical Legacy

GFM: Because you come from a family with such a tremendous and rich musical legacy, as artists carrying the name do you ever feel any pressure at all?

Juan: You know it’s interesting, because we had a conversation earlier today about this very thing, and I wouldn’t use the word pressure. I think I would use the word responsibility. There’s a scripture where Paul says, ‘Hey, Christ has laid the foundation. I’ve come along and built on that foundation. And, I’m just impressing upon you the importance to build upon that foundation in a really responsible way. Be careful. Be cautious. Be thoughtful.’

So, when I think about the Winans name and the legacy and music– first and foremost, I’m grateful. It’s not something I worked for. It’s something that… like any legacy or inheritance… it’s given to you. But, along with it is the responsibility to steward it well and to grow it and to expand it. I feel that way about my name.  While I didn’t necessarily earn it, I do feel a sense of pride and humility at the same time…  if that makes sense… to extend it for the glory of God and to be careful on how I build with it. So, to have pastor Marvin… Uncle Marvin on this song, “It Belongs To Me”, really feels like kind of his stamp of approval for us to take the mantle, take the baton if you will, run forward and try to do something great.

What is Grown Folks Music

GFM: What is your definition of Grown Folks Music?

Juan: No, I totally agree with that. It’s the experience element. I think that the older I get, the more appreciation I have for those who have come before me and like lay this path, and the idea of experience and how it informs everything you do. The decisions you make… from parenting… to you know, creating music or art. Whatever it is, the more experience you have the more informed you can be about your decisions.  Grown folks music is music that has weight because of the experience behind the lyrics. The song… you know, the testimony… if you will. So yeah, I think that’s what grown folks music means to us. There’s some other connotations that maybe we won’t, you know, jump into [laughs]. There’s some music that’s conducive to grown folks with a license to be grown.