About the other night… 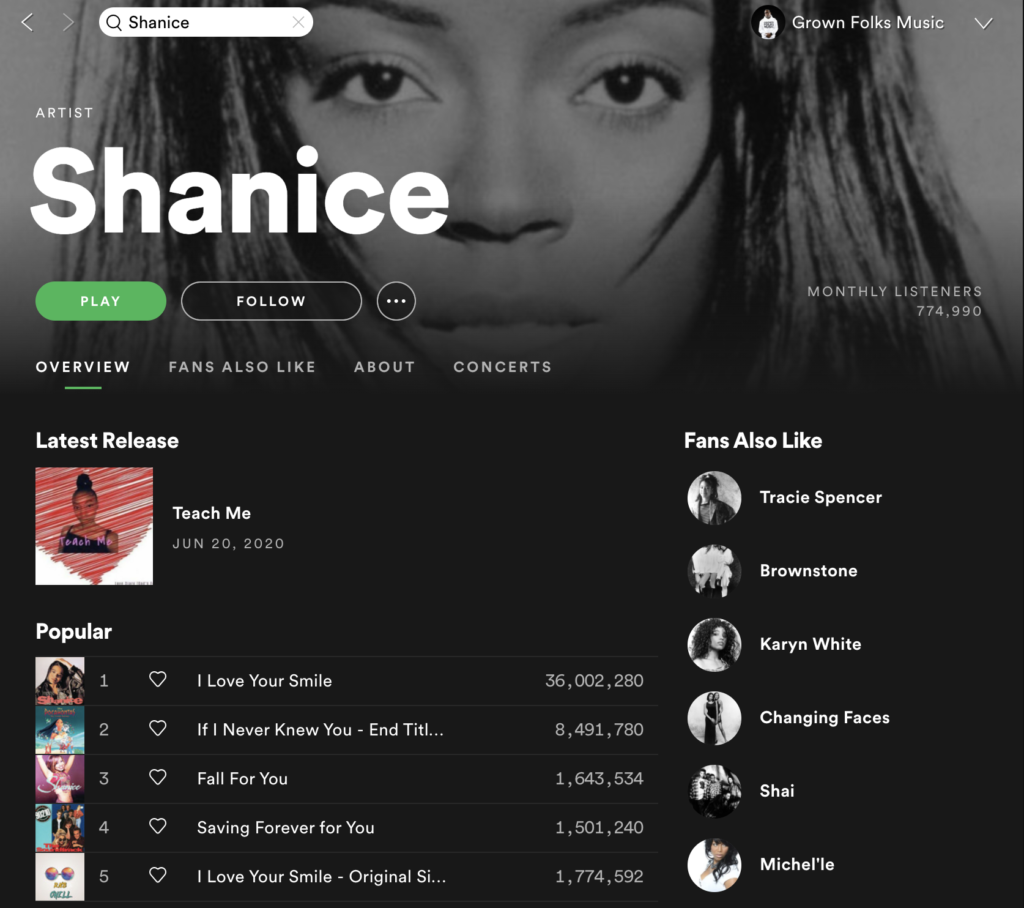 So the other night I was perusing Spotify just doing what I do when I ran up on the new release tab or whatever it is called. I saw something new was out by Shanice. I was like oh alright cool, I love Shanice. Except upon further examination and playing the track I realized real quick that it wasn’t Shanice Wilson. This is music by an artist by the name of Shanice Benn. Press play below.

The video for Shanice Benn is also catalogued under Shanice Wilson’s profile on You Tube.

Because we don’t do that ’round these parts. We’re artist first and celebratory. The reason for this article is to try and ascertain why this case of mistaken identity has happened for both artists and to ponder if and when it will be fixed.

It appears through a cursory search that the music of Shanice Benn is distributed by United Masters. If you’re not familiar with United Masters they bill themselves as “the leading platform for independent artists” but wait, there’s more! Below is a quote from a recent press release from United Masters:

“Disruption and democratization are in our DNA.” said Steve Stoute, Founder and CEO of UnitedMasters. “‘We’re tearing down the construct of ‘gatekeepers’ and putting independent artists in front of the biggest brands, allowing them to choose the terms of their deal, and maintain 100% ownership of their careers – all from their phone.”

Now I might not be the sharpest tool in the shed but a gatekeeper is defined as “an attendant at a gate who is employed to control who goes through it.” The above text that quotes Steve Stoute is from a press release touting the launch of United Masters Select which one of the key selling points of the program are the exclusive brand deals with the NBA, AT&T, Apple Music and many other major corporations. These are music licensing deals, which those deals can be complex in the sense of how you deal with the copyrights, negotiate terms etc. Also, what you don’t see are the Terms Of Service which are obscured by the shiny pretty things that most of us like(pictures, stories of going viral, getting that paper etc.). We have had many discussions here about ownership and the debate of 100% of nothing is still nothing, so if we could somehow have a bigger platform, a partner, I get it. I hate to be the bearer of bad news, but the reality is the deck is stacked. Those are not the words of a Bitterman whose time has passed and has now turned into a hater. So let’s not be haters and look at the data to understand that what United Masters and many other platforms bank on is the number of people who think their chances of visibility or even the ever coveted viral phenomenon is just an upload away. But I’m here to tell you, there’s something else… the data.

From a 2016 article entitled The Gatekeepers Aren’t Gone author Marta Figlerowicz’s thesis is clear: “Viral content seems democratic. But it’s still mostly controlled by big media companies.” Put a pin on big media companies, we will be returning to that is just a few. Let’s look at some hard data though, again from The Gatekeepers Aren’t Gone Figlerowicz writes “But a closer look reveals a grimmer reality. Virality is not really a democratic, participatory phenomenon. Instead, it is shaped by the extreme inequalities that the digitally enhanced capitalist market creates. Indeed, one might describe virality as our most immediate, everyday model for what it’s like to live among the 99 percent.” In other words it still isn’t going to happen without the major players whether you see them or not. But to drive the point home even further lets look at at final quote from The Gatekeepers Aren’t Gone where Figlerowicz states “In this sense, the few artists or performers who manage to go viral are less a grassroots cultural movement and more an unwitting 0.01 percent. They are the tiny minority whose exorbitant, disproportionate success overshadows the innumerable artists and performers who do not receive — and can never really hope to receive — such exposure.”

But this is the I mean story(I’m Southern Black Mama Trained Y’all)that has been used over and over again to get millions of dollars in funding on one side and hundreds of thousands of customers on the other(I believe United Masters states they have around 400, 000 users or so) that the Internet is a level playing field on the corner of “Field of Dreams” Ave. and “I’m About to Blow Up” St. Now, in all fairness this is not a takedown of United Masters, they are the subject of this post because of what I saw transpire(which I will get back to and put a pretty bow on I promise)I’m talking about this whole idea that artists are suddenly empowered and can realize all their dreams now that the equalizer of the internet is in play and the old way of doing business is over. You already know what I’m about to say… “Here’s your new boss, same as your old boss.” actually, I think a more accurate description would be that you really don’t have a new boss, the old boss put on some different clothes with a wig and sunglasses.

So, how did we get here? It’s quite simple. I was scrolling through Spotify and saw the misattribution of work by an artist which could be chalked up to “an honest mistake” because the artists have the same name(however you can’t make those kinds of mistakes and be in business, sorry, not sorry). I then saw where the mistake in question had been made by United Masters when I saw the same mistake was made on YouTube. Are you following me so far? What I had not pointed out until now, which I knew, is that United Masters has a business relationship with Google, and Google owns YouTube. Are you still following? The other point I left out is that in United Masters’ “Terms Of Service” there are a couple of things to be aware of, one of which is a little more pertinent to this discussion than the other.

Now I want to be clear here to all of the litigious among reading this: I’m not saying or alleging anything. I’m just saying. It bears noting that the issue of copyright infringement is a pervasive one on the internet and that some of the aforementioned major media players have faced and will continue to face litigation surrounding the issue. To wit, some words from renowned composer Maria Schneider(who is currently in the midst of leading a class action suit against YouTube(re: partnerships, remember that part). Here are some words from Schneider in 2016 from a guest post on The Music Technology Policy site.

“The real truth is that most music creators on YouTube are making nothing or next to nothing from the use of their work.  YouTube acknowledges that out of all people in the world with videos/music on its service, only 8000 “partners” qualify for Content ID.  The rest of us can put ads on the videos we ourselves post, but likely the majority of us are never paid anything, not reaching the $100 threshold YouTube requires of us to receive the first check.  And our own uploaded content is competing with pirated uploads of our music that we’re left to police.  The mountain of cash from all the music creators who haven’t yet reached $100 must be creating one hell of a “float” for YouTube.” – Maria Schneider

This whole post began with a fairly benign question about the digital equivalent of a typo. Now was this typo done accidentally on purpose, who knows? I’m not really here to debate that at all. I’m advocating that the mistake get cleaned up for all parties involved. I mean you wouldn’t want views and streams to get credited to an artist by mistake because consumers made an honest mistake of pressing play because they thought it was new material from an artist they love. No, no one would want to do that because that’s bad business for everyone. Honestly, in the final analysis I wrote this just to get an answer to my own rhetorical question concerning whether or not the mistake will be corrected. All I can come up with is a maybe or maybe not but one thing I do know is if any copyright infringement has occurred because of this error I know of one artist who won’t have any recourse to do anything about it. Gate, meet keeper.